This project aims to develop an instrument for imaging cells using their mechanical properties as a contrast mechanism and with high resolution. The goal is to design and build a microscopy system that can be used as a general microscopy tool for cell biologists.

To map the elasticity of cells with optical or higher resolution is very challenging. Ultrasound is a way to image with contrast derived from elasticity however, to obtain high resolution imaging this way necessitates phonons (GHz frequency ultrasound). To work at this regime poses many challenges: phonon generation requires laser light and heat which can damage cells, at GHz frequencies the phonons do not travel very far and the pump-probe detection method is typically low in signal-to-noise ratio and slow in acquisition speed.

If all those challenges are solved, then there can be potentially greater benefits: the energy carried by phonons is orders of magnitude lower than that of light, which is suitable for live-cell imaging and allows to use arbitrarily small wavelengths for imaging leading to super-resolution. The contrast mechanism does not require the use of dyes so its label-free and of course it will provide means to image cells based on elasticity at a resolution never achieved before. 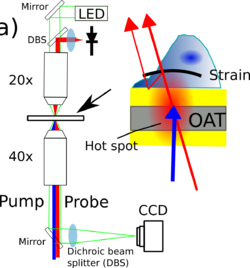 To solve some of the challenges of phonon imaging on cells, a novel detection configuration is being developed. In this configuration, an inverted microscope is used to deliver the pump and probe laser beams through the substrate where an opto-acoustic transducer converts pump light into a coherent phonon field while protecting the cells against unnecessary exposure to pump-light(UVA) and heat. The transmitted probe light (NIR) interacts with the generated phonon-field via Brillouin scattering which is collected and detected for imaging. Since the phonon field is propagating through the sample, its velocity and amplitude is related to the sample's elasticity.

To detect the phonon field the scattered light interferes with the directly propagating light at the detector leading to an oscillating signal. These oscillations are termed Brillouin Oscillations and the Brillouin frequency f_B of the oscillation is given by the simple equation: f_B = 2*Va*n/λ which relates the acoustic velocity Va with the probe wavelength λ and the refractive index n.

The cells are grown on a transducer substrate similar to those described here. The optimization of the transducer layer in this case has the purpose to facilitate detection of Brillouin scattering in transmission and protecting the cells against pump light and heat. This is achieved by using an optical cavity/mechanical cavity as an opto-acoustic transducer. The cavity is designed to have maximum transmission at the probe wavelength while minimum at the pump wavelength. The cavity also is designed to resonate at the desired frequency for optimized SNR. Finally heat is managed through the use of a high thermal-conductivity substrate. 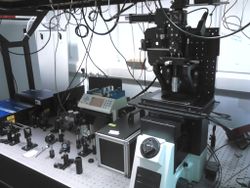 Measurements are made using a pump/probe picosecond laser ultrasound instrument utilizing ASOPS lasers. These laser control the delay between the pulse electronically removing the need to mechanically scan a delay line. This allows the very small signals present in these typos of experiments to be obtained quickly.

The instrument also has optical paths for wide field phase contrast imaging to allow the cells being studied to be visualized. This allows us to assess the cells health and locate the scan region of most interest.

The acoustic signals are captured by recording the probe beam power with a photo-diode, this signal is then filtered and amplified before being digitized with a digital oscilloscope. To build up an image the sample is raster scanned.

An example of an experimental trace obtained using a glass substrate is shown below, there are three main components present in the signal: A signal from the transducer resonance, one from Brillouin oscillations in the glass, and one from the cell or media. These signals are all clearly separated in the the frequency domain as shown by the FFT.

Measuring live cells is much more challenging, this is because the amount of light they can tolerate without being affected is much lower than the amount that would damage fixed cells. Secondly the cells can move around and so the scans need to be taken as quickly as possible. 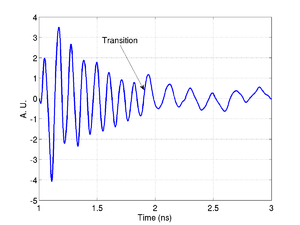 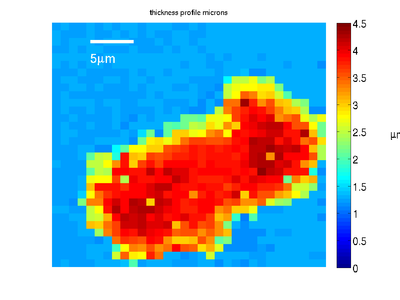