There has been much interest in the optical and mechanical properties of solid and core-shell nanoparticles. Our interest stems from the ability of such devices to interact with ultrasound of very short wavelength allowing the possibility of high resolution acoustic imaging.

There are a number of different fabrication approaches that could be adopted for making nano ultrasonic transducers. Previously, a plate transducer for cell imaging has been developed, but making the lateral dimensions of the transducer smaller than one micron is challenging. An alternative approach to overcome this difficulty and to increase the frequency is to make transducers using nanoparticles.

Nanoparticle acoustic transducers have some attractions:

The scattering and backscattering efficiencies are obtained:

where each layer is characterised by the size parameter xL=2πNrl /λ and the relative refractive index ml=nl/nm, where λ is the wavelength of the incident wave in vacuum, rl is the outer radius of the lth layer, nm and nl are the refractive index of the medium outside the particle of its lth component, respectively, and k is the propagation constant.

The optical sensitivity for a solid gold particle and a PS-Au core-shell particle in air are shown below (the white line is our probe wavelength): 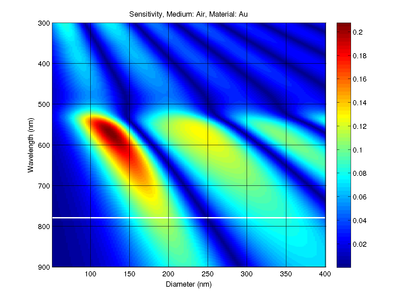 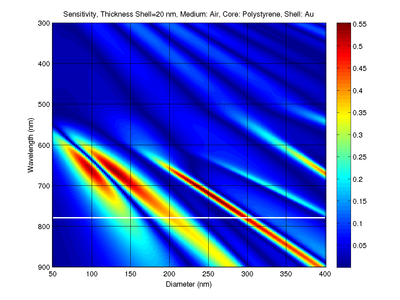 In order to make our transducers resonate at a specific frequency, the main breathing mode frequency has to be modelled based on the parameters of the transducer.

The main breathing mode for a solid silica/gold/polystyrene particle and PS-Au core-shell particle in air are shown below: 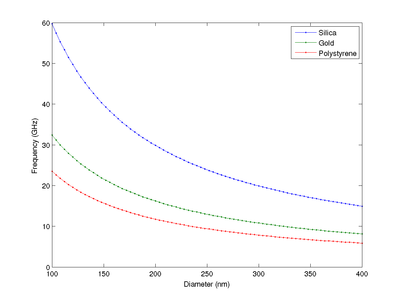 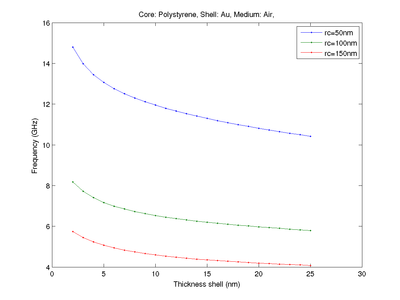 The experiment is based on a dual laser asynchronous optical sampling ASOPs configuration. A simple schematic of the experimental system to test the transducers is shown below:

Experimental measurements from 100, 125 and 150 nm solid gold particles on top of a glass are shown below. The signal contains a "coincidence peak" which occurs when the pump and probe pulses occur at the same time amd a thermal decay. These are removed by signal processing to leave just the oscillation corresponding to the mechanical response of the transducer. This is the main breathing mode frequency and is calculated by a FFT (fast fourier transform) of the oscillation. 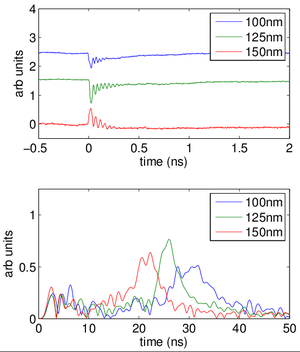