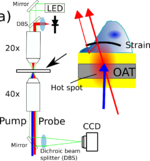 The cells are grown on a transducer substrate similar to those described here. The optimization of the transducer layer is different in this case. Here we are much more concerned with optimizing the optical properties of the transducers. The goal is to reduce the amount of blue light reaching the cell and either maximize the reflected or transmitted light, depending on the experiment requirements. We still have to ensure that the acoustic performance of the transducer is correct and that the acoustic bandwidth is sufficient to generate waves in the Brillouin frequency range of the sample.

An example trace is shown where the Brillouin signal from a cell is shown to be higher than for a plain water sample, the extra peaks present are the resonant frequency of the substrate itself.

Also shown are phase contrast images of the cells on the substrate the cells have very little optical contrast and so a simple bright field microscope is not sufficient to visualize the cells.

The acoustic image has the cell outline applied and you can see that in the centre of the cell the frequency increases. At the edges there is no change from the blue substrate back ground, this is likely due to the fact that the cell is very thin at the edges and so does not produce a Brillouin signal.