Difference between revisions of "NDE for AM"

Additive manufacturing offers a paradigm shift in engineering as previous design constraints, such as tooling paths in matching are removed. The ability to create novel free form structures, such as lattices, clearly offers vast potential benefits for high performance industries including aerospace, medical and tooling. However, the uptake of AM components has been hindered as the process are prone to a variety of defects, such as porosity and cracking, which due to the variation in length scales, 10 µm to 500 µm, and the number of processing parameters, >150, make predicting and optimising against these defects near-impossible.

As such, our optics group is currently working on a number of ways to perform non-destructive evaluation on additive manufactured (AM) parts; currently, XCT is widely used in industry for part validation but is a strictly post-process ex-situ technique and has both time and safety implications. Our aim is to take advantage of the layer-by-layer nature of the AM process to inspect during the build to create a volumetric dataset and validate the part in real-time. Further to real-time validation of the component in-situ inspection offers opportunities to adjust build parameters during the build based on processing signal, analogous with the closed-loop feedback used in conventional machining. Alongside the management of components defects in AM significant research in the field is also dedicated to understanding the microstructure and subsequent mechanical properties of the AM components; in future it is envisaged that the processes can be adapted as such to tailor the component microstructure for a given role, as such a technique which can both verify a components integrity and interrogate the microstructure will be well placed to meet the demands, both current and future, of the AM industry,

Our existing laser ultrasound technique SRAS has previously been used to image the microstructure of metallic samples, giving both grain size and orientation, making it an interesting tool for investigation of SLM samples. Furthermore, In addition to this useful information, the loss of signal or a drastic change in signal amplitude/frequency can be used to measure the presence of both defects on the surface and in the near-surface region. These capabilities combined with the fact SRAS is a non-contact, non-destructive technique makes it an ideal candidate for AM components.

The first SRAS data from AM samples were obtained using the O-SAM system in 2011. The two figures below illustrate the SAW velocity across a blown powder and wire deposited samples with the SAW propagating in the direction of the white arrows. These initial data sets paved the way for the following generations of SRAS system to further investigate the capabilities of SRAS as an NDE tool for AM.

In 2016 a more modern SRAS system was used on Selective Laser Melting (SLM) samples. This system demonstrated a relationship between the mean SAW velocity and laser power used to build eleven cubes using Ti64 powder. As the laser was power increased, an increase in the mean SAW velocity was measured. It was also shown how an in-process SRAS inspection could provide closed-loop feedback to improve the SLM process as a whole. When specifically considering pores, it was shown that alongside detecting, counting and sizing the surface pores, the system was also able to detect subsurface pores. This was in the form of a drastic change in the SAW velocity by ~300 ms-1, wherein the thin plate-like region above the pores, the SAW transformed into a Lamb wave.

The next set of experiments carried out in 2017 were aimed at understanding the capability of SRAS to detect changes to build process, specifically the scan strategies used. Four 10mm cubes were manufactured using a nickel superalloy power (CM247LC) on a Realizer SLM machine. The cubes were made up of four small 5 mm square islands. One sample was used as a control (0°) and the islands were rotated on the other three samples relative to the previous layer. The rotation angles were set to 15°, 30° and 45° across the tree samples. Using SRAS data and verified by optical microscopy several trends were identified between the crack and pore distribution relative to the island rotation angle. Furthermore, the island boundaries were identified using SRAS based on their distinctly different drop in the group SAW velocity. 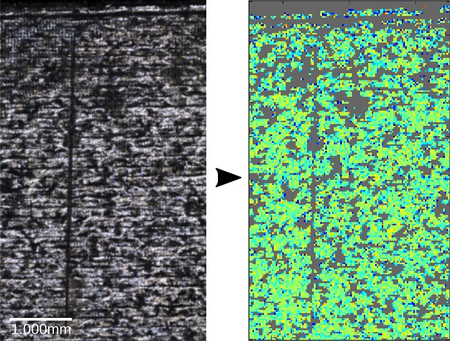 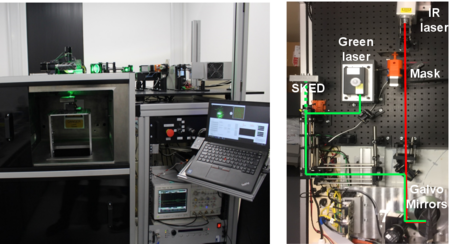 By incorporating the SRAS instrument into the SLM build machine, it shall be possible to image 3D renders both defects and the microstructure on a layer-by-layer basis. The challenges in this project are both in the optical setup, such as measuring signals off rough surfaces, as well as mechanical integration, where atmosphere, temperature, small envelope and interfering particles are all factors to overcome. Furthermore, for the technology to be commercially applicable the quality of data must be balanced against the impact on the manufacturing time. In order to assess this, we have developed a framework for comparing the spatial capability and temporal penalty of various inspection systems.