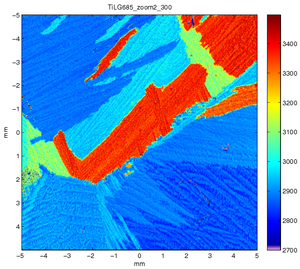 More recently, this approach has been dramatically expanded to allow the simultaneous determination of both the crystallographic orientation and elastic constants. Many engineering metals are polycrystalline; as such, the elasticity, crystalline orientation and grain distribution are cardinal factors in determining the physical properties of the material. However, the elasticity remains a more difficult parameter to measure and is rarely measured because the existing techniques are slow and cumbersome, with most current techniques requiring the laborious growth or destructive isolation of single crystals. By exploiting the global nature of the elasticity we can combine SAW velocity measurements from multiple grains to allow the determination of the single-crystal elasticity matrix (cij) and the crystallographic orientation of each grain. The process of determining both crystalline parameters is outlined in the figure.