High-power lasers have been going under significant development in the past 20 years to increase their performance, in terms of output power, power conversion efficiency (PCE), beam quality, facet passivation and thermal efficiency. The requirement to have laser diodes producing higher output power while avoiding high optical densities at the facets, lead to the design of high-power lasers with large optical cavity (LOC) structures. High-power lasers with LOC structures are generally designed so that, in stand-alone operation, only the fundamental mode lases. But high-power laser diodes are almost always operated as part of a larger optical system, whose function, in the simple systems, is to collimate and shape the output beam. More advanced optical systems are used for spatial mode filtering, phase-locking and wavelength stabilisation, realised through the use of intentional external optical feedback. When a LOC high-power laser is put in an external cavity, the stray reflections off the optics (unintentional optical external feedback) will be significant and will couple into the laser cavity, leading to the excitation, and sometimes lasing, of the higher-order modes.

In this project we investigate the impact of unintentional feedback by modelling a laser diode in an external cavity with optics and looking at how the feedback leads to excitation and lasing of higher-order modes. The modelling is achieved with simulation tool that self-consistently models both the laser diode and the external cavity using a Fox-Li iterative approach through coupling of an in-house laser simulation tool, Speclase, and optics modelling and design software OpticsStudio (formerly known as Zemax).

The coupling between Speclase and OpticStudio is achieved by converting the beam data produced by Speclase into ray data. Within OpticStudio, the rays of a laser source are defined by: launching coordinates, power and direction cosines, which are obtained from the output near-field and far-field. The near- and far- field data are used to calculate the 3D ray distribution which is used to configure the laser source within OpticStudio. Once the laser source is configured, the output rays are traced through the external cavity, taking into account their transmission, reflection and scattering off the optical elements. Next, the coherent irradiance (power density) and phase distribution of the rays returning to the laser facet are converted into a 2D optical field, representing the complex near-field of the reflected beam. The proportion of power, coupled to each vertical mode (i.e. coupled fields), is determined by calculating the overlap integral between the reflected beam and the cavity modes. Finally, the fields coupled from the external cavity and the internally reflected fields, are propagated by Speclase inside the laser cavity using a Fox-Li iteration until the fields convergence.

The functionality of the model and the proof of concept were presented at (Semiconductor and Integrated OptoElectronics )SIOE 2015. Next the model was used to study the impact of unintentional feedback on the excitation of higher-order modes and the results were presented at (High-Power Diode Lasers and Systems) HPDLS 2015. Next, by modelling a 980 nm tapered laser placed in a simple fibre-coupled laser architecture comprised of two collimating lenses and an uncoated fibre, the impact of unintentional feedback on the laser performance, in terms of power conversion efficiency, near- and far- field patterns and beam parameter product, was studied.

Analysis of the obtained results was performed, with particular attention given to the stimulated current and heat generation associated with the external cavity excitation of the higher order vertical modes. These results were presented in an invited talk at Photonics West 2016. 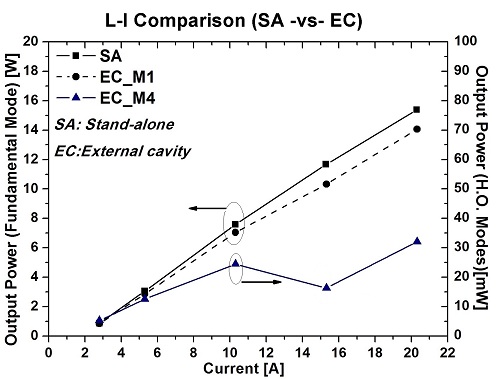